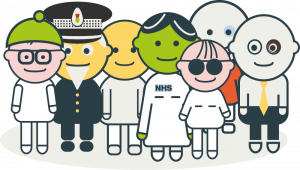 The subject of mental health is far-reaching, with numerous different conditions, disorders and illnesses identified. Every single person has mental health and at some point in their lives, they are likely to experience some problems with it. This is entirely normal, however, for many people, these issues can lead to mental illness and this can have a detrimental effect on their lives and on the people around them. That’s why it’s important to seek help when you feel as though your mental health is an issue. There are many great and effective treatments available that can help people get back to living a happy and healthy life. Below, we have listed some of the most common mental health conditions with a brief explanation of each. While this list is in no way exhaustive it will give you a brief guide to mental health conditions.

Anxiety – feeling anxious or nervous – is an entirely normal reaction to a stressful situation, but anxiety can become a problem for people when it happens regularly and starts negatively affecting their life. Many people with anxiety disorders will start avoiding situations that may trigger their symptoms. The symptoms can range from relatively mild underlying worry to extreme panic attacks. Anxiety disorders are very common and anyone can suffer from them. Successful treatments include cognitive behavioural therapy which helps people to understand their anxiety or medication.

ADHD is usually diagnosed in children, although it can go unnoticed until adulthood. It can often be linked to other mental health disorders. The main symptoms are an inability to focus or concentrate and impulsive and hyperactive behaviour. There is a lot of support available for children with ADHD and the good news is that it usually improves with age. Treatments include changes to lifestyle, medications or various types of therapy. When treated, it’s possible to live a normal and happy life with ADHD.

People who suffer from Bipolar Disorder experience extreme mood swings. Episodes can last for a week or more and during these, moods can quickly shift from highs (mania or hypomania) to lows (depression). People with Bipolar Disorder can make impulsive, risky and dangerous decisions or experience suicidal thoughts. There are different types of Bipolar Disorder, so it’s important to get a diagnosis to find the right treatment. These usually include medication and cognitive behavioural therapy and they can be very effective in reducing or eliminating symptoms.

Borderline Personality Disorder (BPD) is a mental health problem that affects a person’s moods, behaviour and relationships with themselves and others. BPD can be an extremely upsetting disorder as although they are not to blame, people suffering from it display negative personality traits such as mood swings, fear of abandonment and difficulty in regulating their emotions. This can have a serious effect on their lives and relationships. It can be difficult to diagnose as many symptoms are similar to other mental disorders, but when it is, BPD can often be successfully treated through psychotherapy or talking therapy.

Body Dysmorphic Disorder (BDD) is a mental illness that leads people to become obsessed with the way that they look and perceive imperfections or flaws in their self-image that may not be noticeable to others. People who suffer from BDD often form a negative obsession over one part of their body and can develop compulsive behaviours that have an impact on their daily lives. BDD can affect anyone, but people who have it often also suffer from low self-esteem. BDD can be treated by cognitive behavioural therapy that helps people understand the illness and form a more normal relationship with their image.

Dissociation is a feeling of being detached from the world around you when everything you experience seems unreal. This can happen to anyone during their life, but dissociative disorders occur when these episodes become regular or go on for days or weeks. It can be caused by deep stress or a traumatic experience and they are simply the mind’s way of coping. People who suffer from dissociation often describe it as though they are watching their lives from the outside or they may have gaps in their memory. They can also experience flashbacks to a traumatic experience in their past. Once diagnosed, people with a dissociative disorder can learn many useful ways to help themselves as well as be referred to therapy, which can be successful in treating the condition.

Dementia is the term for a range of degenerative brain conditions. Each type of dementia works to stop areas of the brain from working properly affecting people’s ability to remember, talk or think clearly. Although dementia is most common in older people, it can happen at any age and the main symptoms include memory loss, confusion and difficulty speaking. There are many variations of dementia and it’s important to be aware that the symptoms are easily confused with those of other conditions, so you should see a medical professional as soon as possible to get a proper diagnosis. Dementia gets worse over time and it is an incredibly common condition. There is a lot of support available for people living with dementia and their carers.

While everyone will feel low at some point in their lives, people who suffer from depression experience feelings of sadness for extended periods of time. Depression is a serious mood disorder that affects the way people behave, feel and think over weeks or even months. People who are depressed often talk of feeling deep sadness, hopelessness and loss of interest in everyday events. Depression can affect anyone and people suffering from depression can have a wide range of symptoms, so talking to someone and getting a diagnosis is the important first step to recovery. Mental health professionals use a range of highly effective treatments to help people with depression to leave it behind and live happier lives.

Obsessive-Compulsive Disorder (OCD) is a common mental condition that can affect anyone but is most often found in young adults. Symptoms include repeated negative thoughts that cause anxiety or fear and the compulsion to carry out repetitive behaviours that can help to relieve the negative thoughts. The condition can be very disruptive to lives, but it is also treatable and with therapy or medication, it can be well controlled.

Post Traumatic Stress Disorder is a mental health condition that is triggered by a frightening or traumatic event, such as an accident, attack or even childbirth. People who suffer from PTSD can experience flashbacks, sleep disruption or low moods. They can start to avoid certain situations or become reliant on drugs or alcohol. Fortunately, PTSD is treatable with therapy and medication and people who suffer from it can also find their symptoms improve through positive lifestyle changes.

Schizophrenia and other psychoses

Schizophrenia is a mental health condition that leads people to believe, see or hear things that are not real. There are many symptoms of schizophrenia such as hallucinations or delusions. Schizophrenia is a complex disorder and can have many causes and symptoms. In a similar way, other forms of psychosis can cause delusions and hallucinations. Psychotic episodes can take many forms and have a negative impact on a person’s life and wellbeing. However, there are many treatments available and with the right treatment, it is it’s possible to live a full and happy life.

We use cookies on our website to give you the most relevant experience by remembering your preferences and repeat visits. By clicking “Accept All”, you consent to the use of ALL the cookies. However, you may visit "Cookie Settings" to provide a controlled consent.
Cookie SettingsAccept All
Manage consent